Start a Wiki
Advertisement
This Article is part of the Marvel Cinematic Universe - the universe that takes place within the MCU Franchise.

This Article is part of the Marvel Cinematic Universe - the universe that takes place within the MCU Franchise.
It is therefore regarded as Official and Canon Content, and is connected to all other MCU related subjects.

The Mark III (Mark 3) was the third Iron Man Armor designed and created by Tony Stark and is the successor to the Mark II. The armor was designed with upgraded technology and improved features to surpass its predecessor's capabilities. It is also the classic armor.

The strongest of the armors in Iron Man, it was designed for customization. The Mark III was equipped with a variety of incredible enhancements and upgrades. It was heavily damaged at the end of the first Iron Man by the Iron Monger. It was later succeeded by the Mark IV.

Even though it was not used in Iron Man 2 it was put in the Hall of Armors with the other original 7 armors. Also, the suit has flares and strong repulsors, along with more tank missiles. The Mark III appears in Iron Man 3 along with other 6 armors in Tony's garage, and also after where it is destroyed when a terrorist attack occurs in Tony Stark's Malibu Mansion.

The Mark III is the first armor to feature a Red and Gold color design on its armor plates. It's overall theme was based out on Tony's Hotrod car that he owned in his garage. The armor's design is based mostly on the Mark II, with the exception of the color scheme and the capabilities of the armor.

The armor has various new features.

The Mark III has various systems.

The armor is composed of a 95.5% Titanium and 4.5% Gold Alloy with ceramic plating and silicon infused-steel.[1] This combination results into a highly durable alloy that can withstand blasts and strikes, and is fully resistant to bullets and it's used for all Iron Man's armors.

The following below list the special capabilities of the Mark III.

After his test-flight with the Mark II suit discovers several flaws including ice forming at high-altitude, Tony orders the Mark III built with the flaws corrected and made out of gold-titanium alloy to fix the ice problem. After finding out that the Ten Rings have taken control of Gulmira and are using it to stockpile weapons, Tony flies the Mark III to the village and takes down the terrorists.

He then destroys a tank and the weapons stockpile. On the way home, Tony is confronted by two F-22's and accidentally destroys one before Rhodey manages to call them off after Tony saves the ejected pilot's life. Tony then has trouble removing the armor and Pepper Potts catches him doing it. Following the betrayal of Obadiah Stane and the theft of his Mark II Arc Reactor, Tony dons the armor in order to stop Stane.

On the way to Stark Industries, J.A.R.V.I.S. warns Tony that the Mark I Reactor can't fully power the suit and he only has 48% power at the start. Tony arrives in time to save Pepper from Stane who has donned the Iron Monger suit he created based off the Mark I. With Stane's bigger and more powerful design and the Mark III's low power levels, Stane has the upper hand in the battle that follows, but Tony manages to hold his own somewhat, using the Mark III's immunity to icing that the Iron Monger suit lacks.

On back-up power only, Tony orders Pepper to blast the roof with energy from the factory's Arc Reactor as he can't defeat Stane with the weakened Mark III. Tony manages to hold Stane off, ripping out his HUD and weapons targeting systems, but Stane overpowers Tony, destroying the armor's helmet and the glass covering the Arc Reactor.

Tony has Pepper blast the roof while he's still on it with the blast throwing him clear, but knocking out power to the suit and Arc Reactor. The Iron Monger suit loses power too and falls into the factory's Arc Reactor and is destroyed in a massive explosion. The Mark III and Tony's Arc Reactor regain power shortly afterwards.

The Mark III was contained inside the first Hall of Armors, which could only hold four of his known Iron Man suits. It was in between the Mark II and the Mark IV and the armor's Status displayed that it was currently Battle Damaged.(After his battle with the Iron Monger at the end of the first movie) This was right after Tony had his court conference with the government concerning the usage of the Iron Man armor.

The armor was seen again in the Hall of Armors when James Rhodes accessed the garage and donned the Mark II armor to battle Tony against his Mark IV armor when he was in a drunk-state at the night of his birthday party.

The Mark III was destroyed in the attack on Tony's mansion in Malibu, along with the suits in the Hall of Armors.

Pre-released with the game.

The third generation of Iron Man armor, this suit is equipped with a wide variety of weapons and handles like a dream.

The Mark III is the first armor available for use in Iron Man 3 - The Official Game. It is the weakest and most basic armor in the game, having a Score Multiplier of x1.0, and very low Armor Statistics.

It is automatically bought in the start after J.A.R.V.I.S. instructs the player how to play and navigate through the game after initially using the Mark 42 as the starting armor and getting it damaged, with any one of Tony's previous armors replacing it, which was the Mark III first.

In the Jarvis App, the Mark III is a viewable armor available in the Hall of Armors after being unlocked through the Blu-Ray of Iron Man 3 when scanning, or asking J.A.R.V.I.S. to unlock them all by saying the command "Roll Call".

Even though the other armors are fixed and shiny, this is the only armor seen in the Application with damage on it's chest plating, referencing the battle that Tony had against Obadiah when using the suit.

A maximum of 12 IMAGES ONLY can be displayed in this Page's Gallery.
If you wish to Add More Images on the topic or View the Full Gallery of the page, click here. 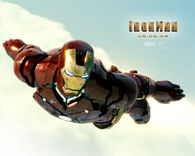 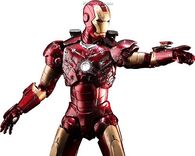 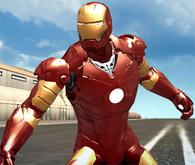 thumb
Add a photo to this gallery