Carter’s latest project—Marvel’s Black Panther—saw her manage a team of over 100 buyers in South Africa, Nigeria and South Korea, plus jewellery makers, mould makers, blacksmiths, fabric painters and tailors on set in Atlanta and in studios in LA, in order to bring the fantasy land of Wakanda to life.

“I selected things from indigenous tribes and implemented them in a futuristic model,” Carter explains of the pioneering costumes that are rooted in African tradition. “Because the culture that [director] Ryan Coogler created is unique, I could combine elements of many African tribes—including the colour red, the triangle shape, neck rings and beadwork—without worrying about cultural appropriation.”

“I don’t like it when I see depictions of indigenous African people that are unrealistic, or speak to the wrong view of what Africa is—a darker, negative view of it,” Carter, who has two Academy Award nominations for her work in Amistad and Malcolm X under her belt, continued. Apart from being a fantastical romp and visual feast for the eyes, Black Panther, she hopes, will give people some “real context” around South Africa, and a sense of hope in a gender-imbalanced society.

The chevron marks on the armour of the all-female warrior clan known as the Dora Milaje, for example, mimic the sacred geometry and imagery found in African artwork. The stacked beadwork suggests the wearer’s marital status, and the tiny talismans on the fighter’s front tabard—a fertility doll, a piece of jade or amethyst perhaps—are symbolic of the wearer’s skill set and spirituality. “I imagined that there would be special Wakandan artisans in charge of creating the Dora Milaje’s armour,” Carter clarifies. “Once a girl reached that special level of fighting, the artisans would create her bespoke armour and present her with it in a ceremony.” The vivid shade of the Dora Milaje’s armour is the culmination of the bold reds Carter saw on her travels in South Africa. “I wanted to enhance the tone of the red, so if you saw four fighters standing together, four felt like 10, because of the strength and saturated nature of the colour.” The rich leather, laced and bound with heavy thread to form a textured second-skin for the Dora Milaje, was painstakingly crafted using a centuries-old technique she discovered while researching. 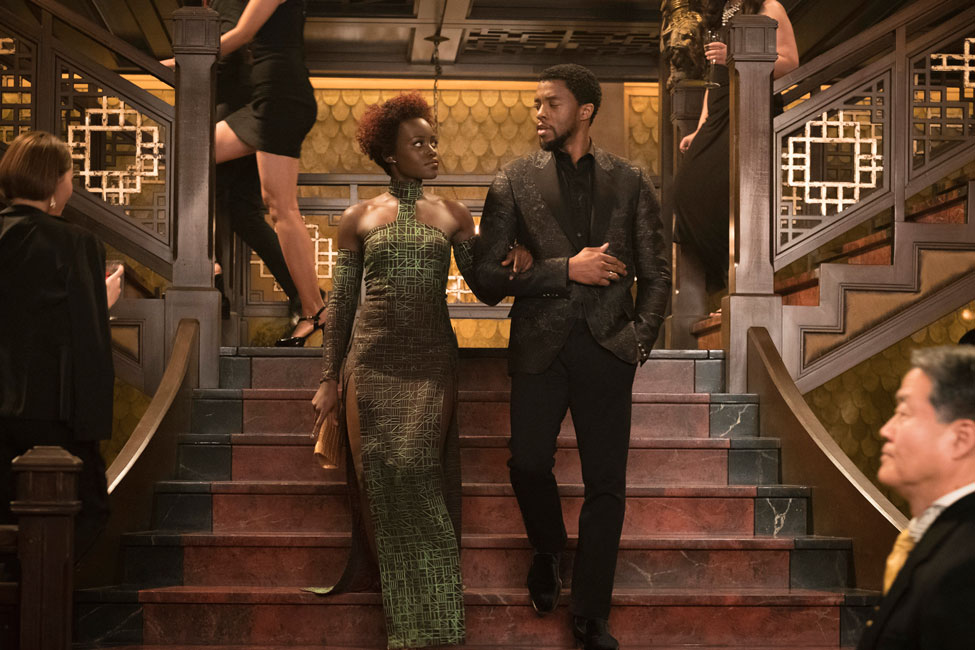 Amidst the artisan commissions—Lupita Nyong’o’s character Nakia’s costumes had to be hand-painted different shades of green to link back to the colour of her river tribe—there were moments of real kick-ass superhero innovation. “Take queen Ramonda, played by Angela Bassett,” Carter shares. “She is the leader of a forward-thinking nation that has greater technology than anywhere else, so her costume had to be grandiose.” Her shoulder mantle was made from special fibres forged together in the world’s largest 3-D printer in Belgium. Her crown, another technological weaving feat, “had to be totally cylindrical, so, unlike the hand-crafted uniforms of her armed forces, it would stand out for its pure perfection”. If Carter had her way her 100-strong team would have spent longer in the workshops. “There wasn’t enough time, there’s never enough time,” she says—she began her research in June 2016, filming started in January 2017, and had wrapped by May 2017. “A lot of things had never been done before and were in the prototype stages,” she continues, while “clasps and buckles that we agonised over for authenticity could have actually been fashioned with Velcro.” A member of the Academy for over 25 years, Carter knows that poring over Velcro counts. If industry predictions are correct and she’s nominated for an Oscar in 2019, she will be in line to be the first woman to take home the Best Costume accolade for a superhero film. “In the current climate,” she muses, “superheroes give people hope.” It’s worth adding, then, that should Carter win, she will be the first African-American woman to score an Oscar for the first cinematic depiction of a black superhero. Now that would be something.

This article originally appeared on Vogue.co.uk