BREAKING NEWS
Tap here to turn on desktop notifications to get the news sent straight to you.

"Logic must be learned from the ancient masters, regardless of the fact that they were not Muslims." Ibn Rushd (Averroes)

There was a Golden Age to Islam once -- a Muslim Renaissance so magnificent, famous, cosmopolitan and cerebral that it's borders didn't always bleed. While some European archaeologists refuse to believe the hype -- not having excavated enough pottery shards -- this era unequivocally produced some of the most enlightened thinkers throughout the Islamic Diaspora. Between the ninth and 13th centuries, the libraries in Baghdad (Bait al-Hikma), Damascus (al-Zahiriyah), Timbuktu (Sankoré), Cordoba (Royal Mosque) and Cairo (Dar al-Hikmah) contained more books, manuscripts and literature than in the entire Greek world. Thanks to China passing along the art of papermaking and the translating skills of travelers, these newborn Islamic scholars went on to become polymaths. They studied spherical trigonometry, agriculture, physics, medicine and science, using astrolabes to measure the altitude of stars while setting up sophisticated astronomical observatories. While Europe was dwindling away from the Dark Ages and the Church was busying itself replacing science with superstition, these Islamic scholars were setting up psychiatric hospitals, correcting Ptolemy, determining the circumference of the Earth while Rhazes produced sulfuric acid and could distinguish whether you had smallpox, chicken pox or measles. Abulcasis was a gynecologist/dentist and Egyptian patients could refill their pharmacy prescriptions at the Qalawun Hospital in Cairo, a facility that offered American liberal's much sought after universal health care. Aristotle, the Greek "master of those who know" was at the top of Averroes and Avicenna's reading list, while some Islamic philosophy paradoxically bordered on secular humanist thought -- with literacy rates that would put the modern day Muslim World to shame. Speaking of literature, two and a half words: Sinbad and Ali-Baba. They became known throughout history as the "Father's of Algebra" with a little help from Diophantus, Aryabhatta, Archimedes, Baudhayana, Hippocrates, Chang Tshang and the Rhind Papyrus (I'm not going to enter that debate in this article), but indeed Facebook CEO Mark Zuckerberg can thank al-Khwarizmi for his employment of the word "algorithm."

Some even hypothesize that the Golden Age of Islam may have been more favorable to women. There are reports of numerous female scholars in Moorish Spain, and philosophers such as Averroes of Cordoba were openly honest about the inequities between men and women as outlined in the Hadith, Quran and auxiliary Sunnah. Contrasted with today, this type of rhetoric would have surely got him issued a fatwa alongside Ayaan Hirsi Ali and Rushdie. He continued to share his illuminating insight about Islam's failed dealings with women,

"Our society allows no scope for the development of women's talent. They're destined exclusively to childbirth and care of children and this state of servility has destroyed their capacity for larger matters. It's thus we see no women endowed with moral virtues, they live their lives like vegetables, devoted to their husbands. From this stems the misery that pervades our cities."

Averroes pièce de résistance, "The Incoherence of the Incoherence," paid tribute to the Greek peripatetics of the Ancient World and made a plea to the Arabic World for a reconciliation of philosophy and theology, sophisticatedly broadening his horizons by incorporating Neoplatonism with the teachings of Malik ibn Anas for his ultimate understanding of the universe. So renowned was he, that Dante and his charming tour guide Virgil later discovered him in Limbo where he could live out his days on green pastures with his first circle of hell comrades, Plato and Aristotle. Unfortunately, Averroes peers including the fundamentalist thinker al-Ghazali, who rebuked and discarded the works of any non-Muslim (kafir), tended to be at the writing vanguard of encouraging caliphs to strip women of comprehensive human rights.

Shamefully, barbarism has always found a way to dismantle even the greatest of societies (ask the Visigoths). While Christians crusaded against the Spanish Moors, about 2,500 miles South East, Hulagu Khan and his genocidal horde of sociopaths claiming to be Buddhist swept in and closed out Baghdad's free thinking utopia. Regrettably for intellectualism, the Mongols had a predilection for burning libraries; subsequently the Enlightenment movements had to wait that much longer to figure out Jesus wasn't an original story. But more importantly, the Arab World would be left with one book to read and re-read and re-read for what would seem time eternity.

In the 13th century, Islam should have made its graceful exit; instead, it survived to become a nation of hermeneutists who would have nothing remotely scholarly to debate for the coming centuries besides whether "flogging" a woman to death should be considered the same thing as "stoning" her to death, and how much dhimmi taxes should be raised at the next lunar month. The Golden Age had officially departed to it's 72 virgins. As Europe entered its own 16th century Renaissance, the Arab World reverted back to the mind sophistication level of their seventh century illiterate warring caliphates who only accepted instruction from divine sources, courtesy of hearing voices from Allah via the Archangel Gabriel via Muhammad, once emerged from a cave in Bedouin attire. In fact, I have been unable to locate one Quranic passage that encourages secular (ilmanniyya) education outside of scripture. Most of the quotes attributed to Muhammad such as "the ink of the scholar is more precious than the blood of the martyr" came from the Hadiths of al-Suyuti, al-Bar and al-Jawzi, which were a collection of post-Muhammad proverbs and narratives written by men who wanted to add their two cents even after the prophet clearly said of the Quran, "Nothing have we omitted from the Book." Subsequently it makes sense that aside from Ba'athists, there are few Mullahs or imams in the Arabic world in favor of the separation of din (religion) and dawlah (state).

The disciplines of science, philosophy, gender studies and history are mitigating factors for those who clutch steadfast to archaic religious tradition, which is why for the most part believers in developed countries have a tendency to interpret primordial texts a little less literally. Orthodox Jews, who have access to The Discovery Channel and Animal Planet, are less likely to live out the tale of Jonah jumping into the mouth of Shamu trying to repent sins of eating shellfish (Shout out to "Blue Planet: Sounds of the Sea"). Conversely, men and women in American Muslim communities are excelling quickly through the ranks of higher education, the Nation of Islam has been transformative in the black community and although there are more accusation of Orientalism than honest dialogue about their brethren 6,000 miles away, there is an understanding that Islamic law must be subservient to the U.S Constitution, a living text that allows for modification and revision, unlike the Quran. As is evident, Islam -- much like the Judeo-Christian religion -- can only attempt tolerance and co-existence while parallel to a liberal arts education and a secular system of jurisprudence, without which there is an inevitable clashing of civilizations.

Unfortunately, in the same regions that once flourished almost 1,000 years ago, we are witnessing the calamitous affects of the Mongol invasion and Christian Crusades. The Muslim world continues to invest only 0.2 percent of their GDP on science, research and development. There are a mere 500 universities in the entire Islamic Diaspora, while not a single higher education facility has been featured in the Top 100 Ranking Universities of the World due to the curriculum focusing more heavily on Surah Al-Fajr than Einstein's Law of Relativity. Since 1901, only two muslims have ever been awarded the Nobel Prize in Science (perhaps more if Scandinavian committees counted the chivalrous chemists concocting poison gas elixirs to throw in the schools for girls). The current literacy rates for males in Islamic communities are dismal, ranging from 43 percent in Afghanistan, 58 percent in Pakistan and 70 percent in Egypt to 30-40 percent throughout Mali, Senegal and Guinea. For female literacy rates you can often take these paltry numbers and divide them by two.

These statistics are heart breaking for a girl like myself who once found insight into my own life through the analytical writings of the legendary brown philosophers of the Middle Ages. In light of the rampant violence, gender disparity and blind indoctrination at the expense of intellectual advancement pervasive throughout the Middle East and Africa, I find myself romanticizing the Golden Age, hoping at some point in the distant future that type of luminosity might return to the Muslim World.

The Golden Age of Islam 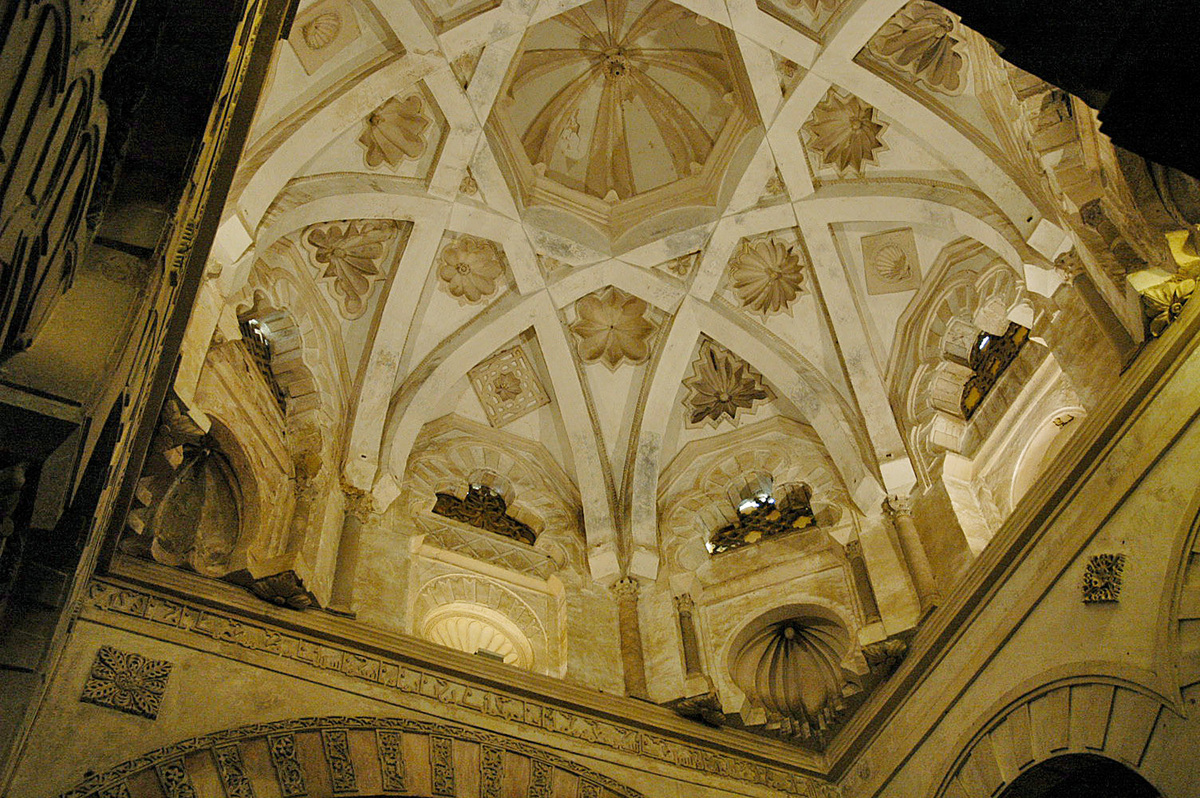 Islamic Inventions
1 / 10
Vaults
Rib vaulting in the maqsura dome of the Great Mosque of Córdoba was added in the tenth century. (Jos. A. Entrenas, Infocordoba.com, page 199)
National Geographic