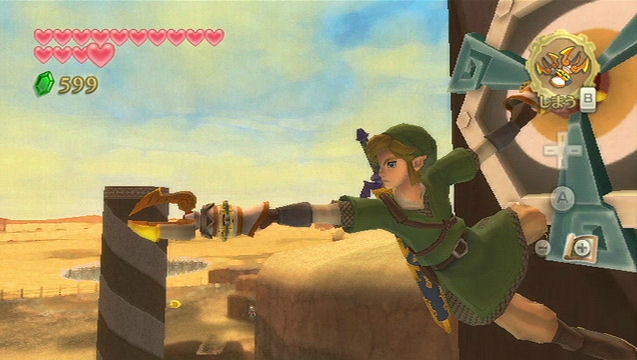 The Legend of Zelda: Breath of the Wild contains many classic Zelda items, such as the Bombs in the form of the Bomb Rune, the Boomerang in the form of various boomerangs you can find scattered across Hyrule, the Bow as main item alongside your sword and shield, and even the Fire and Ice Rods. However, one iconic Zelda item has not shown up in Breath of the Wild: the Hookshot, an item that first appeared in A Link to the Past.

The Hookshot is an item that pulls Link to whatever object it’s aimed and fired at, somewhat like a grappling hook. It has appeared in several Zelda titles since its creation and has spawned several variants such as the Clawshot, Gripshot, Longshot, and Switch Hook.

“We did consider using it to climb, and then you’d parasail down. But initially when we had the hookshot, it was always that you target something, and that was a game mechanic of itself. But that kind of defeated the purpose of what we wanted to accomplish in Breath of the Wild. With the hookshot, we always had to give it towards the end of the game, or else players could just go anywhere. But in this game, you could do that by climbing and parasailing.” – Eiji Aonuma

“In the early stages of development, we did actually do some tests with double hookshots and just being able to kind of go anywhere, like Spider-Man. Your mobility and your speed was just kind of incredible. We did do some tests like that. Honestly, the hookshot kind of completely breaks the climbing mechanic. There’s lots of fans in the staff, even at pretty high levels, who really like the hookshot and they kept bugging me about it. I eventually just had to say ‘No! Hookshot is gone. There will be no hookshot in this game. If we put the hookshot in this game, it’s not going to work.’ We were just going back to what we did before, and Breath of the Wild is all about doing new things.”- Hidemaro Fujibayashi

It sounds like including the Hookshot would have affected Breath of the Wild‘s climbing mechanics.

But what do you guys think? Let us know in the comments below!

Comments
Sorted Under: Breath of the Wild, News, Zelda News
Tagged With: No tags were found for this entry.