Marrow (Sarah), is a Marvel Comics character, associated with the X-Men. She is a mutant whose bones grow out of her skin and can be removed from her body, providing her with potential knives and clubs as well as body armor. As a child, Marrow was taken in by the Morlocks, a band of grotesque-looking mutants who hid in tunnels beneath New York City. As a young adult, she formed the violent splinter cell Gene Nation until, under the orders of Morlock leader Callisto, she joined the X-Men to redeem herself. She made progress controlling her powers and learning a moral code, but eventually fell in with the paramilitary group Weapon X. As a child, Marrow first appeared in Cable #15 (September 1994) and was created by writer Jeph Loeb and artist David Brewer. However, Uncanny X-Men writer Scott Lobdell and artist Joe Madureira defined her powers and temperament. She has shown herself to be a staunch team player (more-so with the X-Men than with either Gene Nation or Weapon X) who is prepared to risk her own life to protect those of her teammates. Despite her apparent disdain for humanity, she has revealed that she would like nothing more than to be able to fit in with them and be happy. While there have been occasions that this has happened for her (in an art gallery with Colossus and immediately following her genetic redesign by Weapon X), they have never lasted long and only served to increase her anger and bitterness towards the world when they have been taken away from her.

As a child, Sarah was one of the underground-dwelling Morlocks. During the Mutant Massacre that devastated the Morlock community, she witnessed the mauling of Angel by the Marauders. She was also personally saved by Gambit, who was not yet known by the X-Men. Years later, most of the surviving Morlocks (including Sarah) were apparently killed by Mikhail Rasputin, although they were actually brought to another dimension. There, Mikhail had established a citadel for himself on the top of a massive hill. The Social Darwinist philosophy of "survival of the fittest" was the only thing which governed the society. If someone could reach the summit of the hill, they were considered "fit" and worthy of being part of Gene Nation. The former Morlock leader Callisto cared for Marrow during this period and displayed a maternal attitude towards the young mutant, although the two are not known to be biologically related. When her powers fully manifested she was forced to "up the hill", becoming more savage and killing her opponents to survive. When she managed to reach the top, Mikhail considered her fit to join his elite fighting team Gene Nation, which eventually became a terrorist group whose mission was to punish humans for their hatred towards mutants. 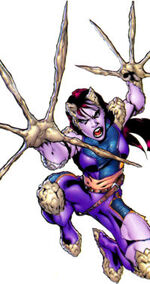 Note: Marrow has lost her abilities since M-Day and is a "Rem" a person with visible remains of the lost mutation*

Marrow is a mutant with the ability to enhance the growth of her skeletal structure. Initially this was uncontrollable, but after enhancement by a Skrull medical facility, and later by Weapon X, she can mostly control this, despite each enhancement having partially failed over time. She utilizes this power in many ways, including the creation of knuckle guards, spears, and projectile spikes. She also possesses a healing factor and enhanced immune system, much in the same vein as Wolverine since every time a bone is ripped out a wound remains which closes itself soon after. She also possessed two hearts to compensate for her random bone growth, so when Storm ripped one out she was able to survive. It's possible that the first heart could have regrown due to the healing factor. Her bones seems to be much more durable than normal; she had easily survived heavy hits in multiple areas of her body. For example, Flagsmasher hit her twice on the head with his mace without much damage, and Sabertooth likewise threw her against a wall without harm. She also jumped off the Brooklyn Bridge twice (something that would have resulted in death or at least crippling injuries) without any major damage, being able to walk away from the scene. Like most mutants in X-Men who possess a healing factor, she is also more agile and stronger than the average woman in her age group and physical condition. Marrow has excellent tracking skills, spotting a hidden Prime Sentinel even a super soldier like Sabra hadn't noticed. An often overlooked part of her mutation is her unnatural skin and hair color. In almost each of her appearances, Marrow has pink colored hair similar to Polaris' unnatural green hair. While she was sometimes shown with a normal Caucasian skin tone, Marrow is also often shown to have a strong pink tone in her skin (during Weapon X her hair and skin color was purple for some time).