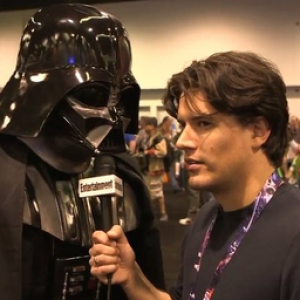 To read more on Black Panther and this year’s Comic-Con, pick up the new issue of Entertainment Weekly now on stands, or buy it here now. Don’t forget to subscribe for more exclusive interviews and photos, only in EW.

“I’m a fan myself. And I find … I’m honored, man, to be on a project that people care about this much,” the director says.

Black Panther is much more than a comic book movie. T’Challa is the historic first black comic book superhero, and he matters more than most good-guys. He helped make the world a better place for real.

The story of Black Panther, set in the Afrofuturist paradise of Wakanda, features a noble, brilliant, powerful man of color leading and protecting a country that is a century (at least) ahead of the rest of the industrialized world. Wakanda is wealthy, innovative, and prosperous — and it has never been conquered.

This character and his world have come to represent a special kind of pride, imagining an inspiring alternate history for one part of a continent that has been scarred by cruelty and subjugation. The storyline defies colonialist history and the exploitation of Africa’s resources and enslavement of its people. Also, Wakanda is beautiful. Wondrous. And there’s nothing else like it, in this life or the fictional one.

After debuting in Fantastic Four #52 in 1966, Black Panther went on to star in the series Jungle Action, then became his own headliner. Over the decades, he became a continued source of inspiration to many kids, especially those with brown skin who had never seen themselves represented in comic book pages.

Coogler was one of them.

“When I first discovered comic books and superheroes, I remember falling in love with X-Men the first time I saw Bishop. I was like, ‘Holy smokes, there’s a black X-Man?’” says Coogler, who’s now 31.

“Then I found out Stan Lee talked about how Malcolm X and Martin Luther King were some of his inspirations for Magneto and Professor X. So I was like, ‘Jeez, my culture is influencing this!’ And this is being referenced. But I always did long for that one [black] superhero who the whole book was around. The same way I could pick up a Captain America book or a Spider-Man book.”

So the future director of Fruitvale Station and Creed visited the Dr Comics & Mr Games store near his elementary school in Oakland, Calif. “I remember going in there saying ’You got any black superheroes? Got anybody who looks like me?’” Coogler recalls. “The first thing they did was walk me over to Black Panther.”

Now he’s doing the same thing, both telling the T’Challa’s story, but also making the introduction to a much wider audience.

“He’s making this movie for his 8-year-old self. That’s why you do it,” says Kevin Feige, president of Marvel Studios and the architect of its 18-movie (and counting) interlocked franchise.

“Most importantly, you do it for other 8-year-olds, to inspire the next generation the way we were inspired,” Feige adds. “And in this case, when Ryan was growing up, perhaps there weren’t that many of these heroes to be inspired by that looked like him.”

We’re sitting in the Marvel Studios offices on the Walt Disney Studios lot, where Coogler and Feige are taking a break from editing the movie. Feige urges the director to tell the rest of the story — what happened the day he got the job directing Black Panther.

“Yeah, it was really my wife,” Coogler says, rubbing his neck and smiling sheepishly. “The day I took the job was an out-of-body experience. She was like, let’s go to that same shop that you told me about. It’s on Piedmont Avenue.”

So they got in the car and drove back to the neighborhood where Coogler went to grade school. Dr Comics & Mr Games is still going strong.

“We went in and I bought the two Black Panther comic books I could find,” Coogler says. “I was like, you got to take a picture of me. And I sent it to Kevin.”

Just imagine if the kid who first walked into that store, way back when, could see it, too.